Like the entire automobile industry, Autoneum was massively impacted by the effects of the coronavirus pandemic in the first half of the year. The temporary plant closures at almost all customers in every region, especially in the second quarter of the year, not only led to an unprecedented market collapse, but also to a production stop at all 55 Autoneum sites. Starting in February in China and then one month later in all other regions, vehicle manufacturers temporarily shut down production completely. The corresponding massive drop in global vehicle production led to a slump in revenue at Autoneum of –32.7% in local currencies. This reflects the development of the market in the first half of 2020, which contracted by –33.2% year-on-year. Revenue in Swiss francs at Autoneum fell by –36.8% to CHF 730.6 million (prior-year period: CHF 1 156.1 million). Revenue development in all Business Groups outperformed the respective markets, particularly in Asia and the SAMEA (South America, Middle East and Africa) region.

Autoneum promptly responded to the pandemic-related market slump by adopting extensive cost-cutting measures in all regions. These include the reduction of employee costs by, among other things, adjusting time accounts, introducing short-time work at eligible locations and temporary layoffs as well as headcount reduction, mainly among temporary workers. In addition, operating expenditures were limited to the absolutely necessary. The investment volume for 2020, already reduced from previous years, was downsized even further. Autoneum continues to benefit in this regard from the high level of investments undertaken in recent years.

Although the coronavirus crisis and the measures taken to contain it dominated Autoneum’s course of business in the first half of 2020, the Company achieved necessary operational and financial improvements during this period. The comprehensive turnaround program for the North American sites made further progress and is on track. Efficiency improvements already achieved there had a positive effect on the figures of the first half-year, but were significantly over­compensated by the substantial impact of the COVID-19 crisis. Savings and cost flexibilization measures taken immediately and implemented worldwide in view of the revenue loss could not offset the ongoing, capacity-related fixed costs. This led at the Group level to a negative EBIT of CHF –31.8 million (prior-year period: CHF 16.4 million), which equates to an EBIT margin of
–4.4% (prior-year period: 1.4%). The net result decreased because of the severe revenue shortfall to CHF –54.9 million (prior-year period: CHF –6.0 million).

Despite the half-year loss, free cash flow improved by CHF 40.6 million to CHF –13.9 million (prior-year period: CHF –54.5 million), mainly as a result of substantially reduced investments in tangible assets and a smaller increase in net working capital compared to the prior year. Driven by the negative result, net debt excluding leasing liabilities rose to CHF 372.8 million (December 31, 2019: CHF 335.0 million). In view of the current course of business, the existing credit agreement with a bank syndicate in the amount of CHF 350 million was amended in June 2020. The long-term financing of Autoneum is secured on a sustainable basis. 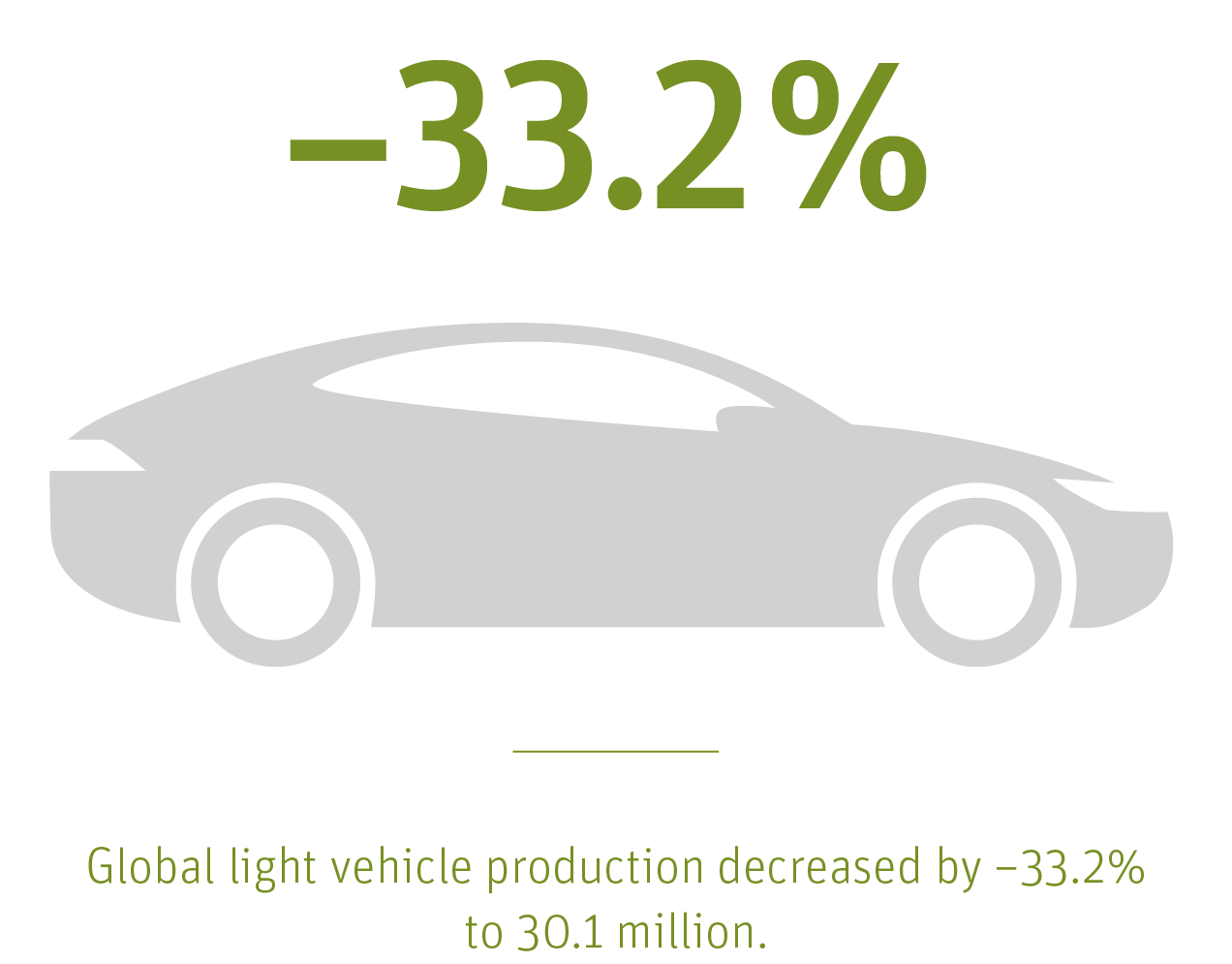 Early this summer, Autoneum became the first automotive supplier in acoustic and thermal management to launch a comprehensive sustainability label for its products: “Autoneum Pure.” The label recognizes new noise and heat protection technologies that demonstrate excellent environmental performance throughout the entire product life cycle. It allows vehicle manufacturers to identify at a glance which products are most suitable for use in future, environmentally-friendly models.

For example, the “Autoneum Pure.” label is awarded to components with a high proportion of recyclable materials or to those that achieve significant weight savings compared to comparable products. Various multifunctional Autoneum technologies already meet the high standards for Autoneum Pure products, including the latest innovation Mono-Liner. This textile wheelhouse outer liner impresses thanks to its lightweight construction among other things, thus contributing to a higher driving range for vehicles with combustion engines as well as for electric models. The production of Mono-Liner wheelhouse outer liners is particularly resource-friendly too: Scrap from the component manufacturing, which consists largely of recycled PET fibers, can be processed into pellets and completely returned to the manufacturing process as fibers. Two US-American SUV models are already benefiting from these lightweight wheelhouse outer liners.

Business Group North America also managed to partly offset the severe market slump and posted a reduction in revenue of –35.0% in local currencies. Revenue in Swiss francs amounted to CHF 311.5 million (prior-year period: CHF 502.5 million). Despite massive disruptions caused by the crisis, the turnaround in this region has progressed according to plan and is showing the targeted results. Production downtime was used intensively to implement the planned production relocations and process improvements, amongst other things. However, EBIT fell to CHF –43.1 million (prior-year period: CHF –33.1 million) due to low fixed cost coverage, though the turnaround program in this region is taking effect and made a positive contribution.

With revenue down just –9.4% in local currencies, Business Group Asia held up well in the first half of 2020 in a market that has shrunk almost threefold. Revenue in Swiss francs decreased due to exchange rate effects by –15.5% to CHF 105.8 million (prior-year period: CHF 125.1 million). Production at the Autoneum plants in China, the market first affected by the pandemic, reached pre-crisis levels again at the end of the second quarter. Thanks to the prompt adoption of cost flexibilization measures there, the EBIT of this Business Group dropped only slightly from CHF 6.0 million in the first half of 2019 to CHF 4.8 million. At 4.5%, the EBIT margin was almost on a par with the prior year’s level of 4.8%.

The SAMEA (South America, Middle East and Africa) region has also been severely impacted by the effects of the pandemic during the first six months, which is reflected in a steep downturn of local vehicle production of nearly 40%. The Business Group managed to escape the negative dynamics to some extent: At –25.1%, inflation-adjusted revenue in local currencies declined much less sharply than the market. Due to the continued strong depreciation of various currencies in the region, revenue consolidated in Swiss francs fell by –40.5% to CHF 37.9 million (prior-year period: CHF 63.6 million). EBIT decreased to CHF 1.9 million (prior-year period: CHF 4.2 million) as a result of weak capacity utilization. The EBIT margin, supported by a favorable model mix, was at 5.0% (prior-year period: 6.6%).

For 2020 Autoneum expects revenue to develop at market level. Although customers’ production volumes should increase again in the second half of 2020 compared with the first semester, latest forecasts indicate that they will remain clearly below the level of the second half of 2019. Immediately implemented and ongoing cost reduction measures as well as further operational optimizations also within the turnaround program in North America will lead to improvements in the second half of the year. Due to the current uncertainties, a reliable statement on the net result for the full year 2020 thus cannot be made. With regard to the mid-term targets, a recovery of the profitability level is expected, but it will largely depend on the market development.

Chairman of the Board

back
Autoneum at a Glance
next
Consolidated income statement